It so warms my heart when I hear of how others also embrace and love the Wild Horses here in Alberta as I do.

Recently I received an e-mail from Linda and Tim Holden on their rescue of another injured wild horse foal. Linda and Tim have some property west of Sundre that borders the public Forestry Reserve. Here is their story on the rescue of “LUCKY”.

On Saturday June 19 the Holdens were spending the weekend at their property and it was getting late when they decided to go for a quad ride.  They decided to go a little further than normal in hopes of seeing some wild horses.   As they moved along a lease road they spotted two small herds, one on each side of the road.   As Linda put it, “we were even more thrilled to see some beautiful babies as well.”   As they moved down the road with their four dogs, they noticed what at first appeared to be a very small deer moving toward them with it’s head down.   They called their dogs back who had gone up and sniffed at what they could now see was a wild horse foal.  It did nothing with the dogs, but stand there with it’s head down.  At that point they knew something was terribly wrong with it.  Tim approached, but it just walked around him and continued down the trail to where Linda and their neighbor Wally waited on the quads.  None of the wild horses came to protect the foal and Tim was able to walk along side it right up to the quads where it just stood, as Tim talked softly to it.  Just then one of the dogs barked and the foal moved off across the clear-cut towards one of the herds.  It was then that Linda and Tim noticed a terrible large open wound on the right rear leg of the foal.   Linda said her heart just sank at seeing this.  It sank even further when this herd turned on the foal and chased it off.  Linda states, ” I will never get the image out of my head of her returning to the road and walking away in the same manner with her head held down”.  They decided that they had to do something right away.  However the foal had moved across the meadow and it was getting very dark.  Tim was unable to catch up with foal and Wally reasoned that at that point there was nothing more that they could do right then.

For Linda and Tim, “it was one of the worst night in our lives. We couldn’t eat, drink, talk or sleep.”  The only way they made it through the night of worrying about the foal was in making a plan to head out first thing Sunday morning and find her.  Their hopes were low though as they thought that they would be unable to locate her again in the dense bush.

Next morning they got a later start than they had wished and at first tried to go into the area in Linda’s truck.  This was to make it so they could easily carry the foal out if they located her.  No luck.  So back to the farm, here they loaded all their rescue equipment onto the back of the quad.  With soft blankets and rope, water and a lariet, they started out.  As they started, things started to go wrong, the quad was acting up, the gate that they usually access to the forestry had been locked and the sinking feeling that they may never find the foal again set in.  Then as Linda put it, ” a strange thing happend”, a feeling came over her and she decided right there and then that they would be able to find her rescue the foal.

Then a minutes later there she was about 5 miles closer than when they had seen the night before.  She was just standing there, “like she was waiting for us to come. I sobbed with relief”, Linda says.  At that point there were two other guys sitting on their quads also watching the foal, but they said that it would not let them approach her. It was decided that since Tim had been able to approach her the night before he would see what he could do.  According to Linda, Tim has a soft way with animals and he was able to walk up to her and put a loose lariat around her neck.  Linda tried to give the foal water but it was not interested in it.

They used soft ropes and hobbled the little thing.  They needed to get her help quickly.  Linda states, ” as soon as the ropes touched her legs she sunk to the ground, closed her eyes and began to breath really heavy —- she had truly given up at that point.” 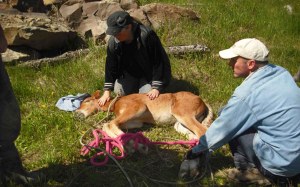 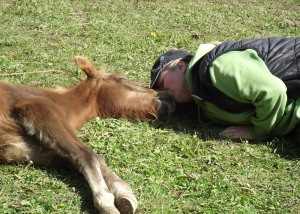 Linda and Tim were worried how they would be able to get “Lucky”  back to their farm over the rough terrain that they would have to take, without causing the foal any harm.  Then like a miracle again,  coming down the road was their neighbor, Dennis and his son, who did have a key for the access gate.  They were then able to make a rather smooth quick journey back to the farm.  Here lucky was able to be put on her feet, she whinnied at the other horses and then Linda was able to get her to drink.  Having the other horse around seemed to pick up the young foals spirit. 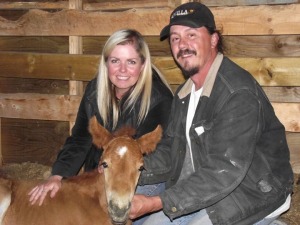 The foal is doing well now a days and with the help of friends of Linda and Tim’s and also mine, Dan and Karen the foal is growing and putting on weight.  The horrible wound is healing and her future looks very bright.  As Linda puts it, “it was a joyous thing to see her run for the first time and every time since.  I have a hard time explaining my feeling about her and what happened that weekend.  Tim and I feel extremely blessed to have been part of the miracle that is Lucky, and every moment that we have with her”. 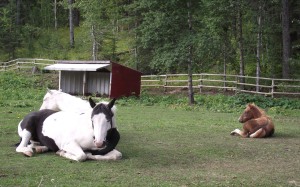 I thought sharing this story in it’s entirety was the right thing to do.  I feel so blessed myself, that there are so many other people out there who care about our  wild horse.  It has been a wonderful year with the stories of rescues and that the summer has brought lush grass to the hills where this years foals and the herds of wild horses are doing so well.

Thank you Linda and Tim and those others who played a part in saving Lucky, a true and fitting name.

4 thoughts on “Another “LUCKY” Rescue”