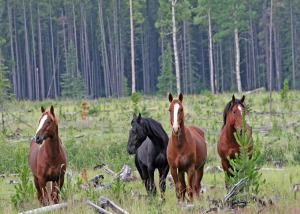 Every day that I get to spend out visiting the wild horses is an exciting adventure for me.  The beauty of these horses is unsurpassed and their reaction to threats or situations is always a learning experience into the dynamics of wild horse herds. It was no different last Sunday when we went for a ride on our own horses. The day was perfect for riding with nice temperatures and few bugs. Got to love it!
We had been riding for awhile when we decided to take a lunch break at the edge of a large meadow. It was not until we dismounted that we noticed four young studs that were grazing in the meadow. We tied up our horses and sat down to enjoy our sandwiches, all the while watching these 4 boys. As we sat there, the young wildies then noticed our horses and decided to approach for a look.
Of the four, the 2 young sorrels, especially the youngest, were extremely curious of who these other inhabitants were that had entered their world. Cautiously they approached to investigate. Then seemed especially interested in my mount, Magnum, who is mostly white and so an unusual colour to them, for a horse. It was totally amusing, when Magnum watching the wildies come in, stomped his hoof at the approaching boys, as if playing with them. With this little action, the 4  wheeled around and galloped off aways before they stopped and approached again.
Magnum was quite impressed with himself at being able to make these horses run off. Undeterred, in they came again. This time my Akitas, who are always on the trail with us, were  investigating the smells of the meadow. The studs were fascinated by these creatures who were not acting as wolves. We laughed as the horses began to follow the dogs around.
The dogs who are so used to our own horses and the wild horses could care less. It is so much fun to watch the wild horses as no matter where we find them, come in to investigate the dogs. This over the years has given me the opportunity for some fantastic close-up photographs.
Again, it was entertaining to watch the boldness of the one young stud. While the others would flee a short distance at any sudden movement, this boy seemed braver than his friends and would continue to come in closer and closer.
After we finished our lunch, having had many laughs over the antics of these horses, we stood up to mount and continue our ride. It was only at this point that this overly curious boy, along with his almost twin counterpart, kicked up their heels and took off.
Who could not enjoy a lunch break with such beautiful enthralling entertainment?
This example of the curiousity of the younger bachelor studs, does not hold true for more mature bachelors or the herds under the control of a dominant stallion. In these herds the stallion may show some curiousity, but mostly he is actually exhibiting his wonderful nature in protecting his mares and foals. This is especially true this time of year when the foals are still very young.  A lot of times, these herds will flee as soon as they see us, even when we are on horseback.
Bob